The scaling up of COVID-19 vaccine production in the United States is impressive. Depending on the decisions taken by the Biden Administration in the weeks ahead, surpluses of vaccines could soon arise. This note presents estimates of the size of that surplus under different scenarios, each reflecting a distinct policy choice by the White House. Recent events influenced our choice of policy scenarios. First, some vaccines have reported high levels of efficacy among children, raising the question as to whether inoculation will be extended to those Americans aged 5 years or older. Second, fears have been expressed about future variants and the need to build up a U.S. reserve of vaccines. Third, in mid-March the Biden Administration decided to “loan” four million doses of AstraZeneca vaccine to Canada and Mexico. The White House press secretary is on record stating “Our first priority remains to vaccinate the US population, but the reality is the pandemic knows no borders and ensuring our neighbours can contain the virus is a mission critical to ending the pandemic.”

We defined four scenarios, each reflecting different possible U.S. objectives: (1) vaccinate the U.S. adult population, (2) vaccinate the U.S. population aged 5 or over, (3) create vaccine reserves (we present three options each with a different scale), and (4) vaccinate the population of Canada and Mexico as well. Each objective requires a certain amount of vaccine doses to be produced (see the fourth column of the table overleaf). We report the date when the required production level is met (see column five) and the dates when any surplus generated thereafter reaches 100 million, 500 million, and a billion doses (see columns 6-8).

Production necessary to vaccinate the U.S. adult population should be completed by 20 June 2021. Following that a surplus of 500 million doses would have accumulated by 25 September 2021. These two dates move back to 18 July 2021 and 18 October 2021, respectively, if American children are inoculated as well. Should the White House decide to inoculate the populations of Canada and Mexico as well, then no surplus will be available until 16 September 2021. Clearly, the larger the U.S. vaccine reserve created the later surpluses become available. The date when the United States can contribute to vaccine dissemination outside of North America is materially affected by the scenario chosen.

Box: How the scenarios were analysed

Data was collected on stated annual production capacity for each vaccine manufacturing facility in the United States. Airfinity tracks the production and deliveries of vaccine doses by each site where vaccine manufacture is underway. Start dates for the bulk production at sites yet to come online are estimated based on when the relevant vaccine is expected to publish phase 3 efficacy data and be approved. A production facility usually takes 3-4 months to reach capacity, an assumption based on expert insight. When available, a production forecast is matched up to observed data and any discrepancies result in adjustments to the forecasting model. This approach generates forecast over time of the total number of doses produced within the United States. Using demographic data on the number of doses needed to fulfil each scenario and the forecast production time profile, the dates when there will be enough doses to fulfil each scenario is identified as well as what surplus, if any, remain.

Table 1: Dates when total doses needed for each scenario have been met and then when target surplus levels (100 million doses to 1 billion doses) are achieved.

Figure 1: U.S. Vaccine Production Build Up Over Time and Threshold for each Scenario. 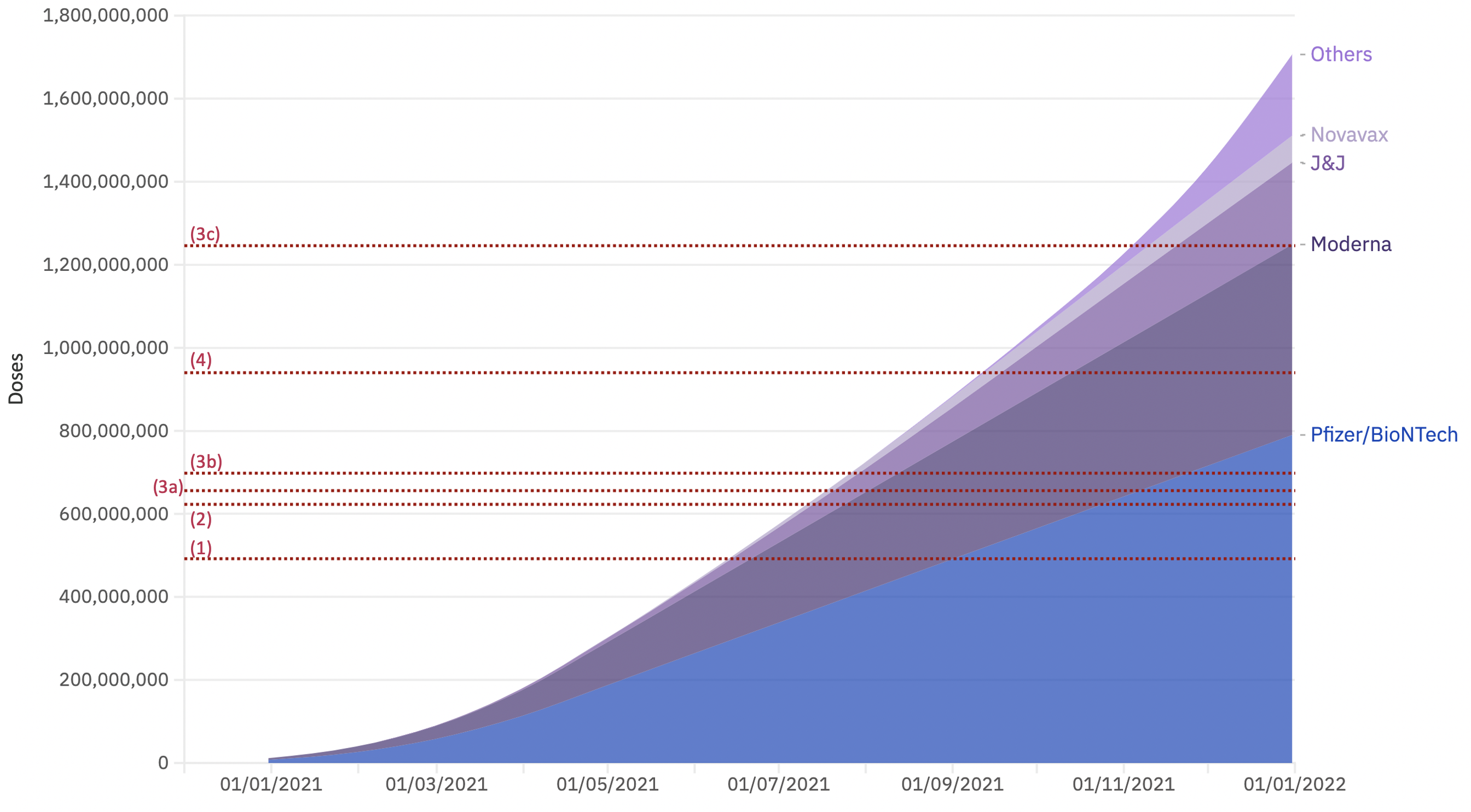 What does Monkeypox teach us about pandemic preparedness?