Currently there is a shortage of COVID-19 vaccines. The 1.73 billion doses of vaccine produced to date pales when compared to the 10.82 billion doses needed to inoculate 75% of the world’s population aged 5 or over. The shortage is acute in many developing countries that have been unable to secure vaccine supplies—hence legitimate concerns about the equitable access. That new variants develop among the un inoculated which then spread across borders is a reminder that a global perspective on vaccine production and distribution is required.

The private sector is ramping up fast COVID-19 vaccine production, thereby narrowing the gap between vaccine supply and demand. The purpose of this note is to report the latest estimates of how much of the vaccine shortage will be eliminated this year, given what is known today about existing vaccine production capacity, announced capacity expansion this year, and sobering lessons learned from attempts to boost production during the first five months of this year. The projections reported here do not include any extra production that might result from the adoption of a TRIPS waiver at the World Trade Organization.

Inevitably, any forward-looking exercise like this involves making forecasts—details of which can be found in the box below. How good are previous forecasts using this approach shows the total production levels forecasted in February 2021, the observed outcomes, and contrasts them to the vaccine manufacturers’ projections. The latter were way off. However, Airfinity’s forecasts closely track the substantial vaccine production increases observed in March and April 2021. The average percentage forecast error fell from 20.1% in March to just 9.8% in April.

Using the same method, and taking account of the fact that 18 vaccines are in phase III trials and given what is known about the likelihood of their approval and related production plans, it is possible to project out COVID-19 vaccine production through to the end of 2021 (see Figure 2). By the end of December 2021, the total number of doses produced is projected to be 11.14 billion, exceeding the 10.82 billion doses needed.

Production in the third quarter of 2021 is expected to be in excess of 3 billion doses, whereas in the fourth quarter production is expected to reach just under 5 billion doses. Should these forecasts come to pass, enough vaccine will have been produced this year to reach herd immunity worldwide. Booster shots would add to demand—but the first round of inoculation would not be held back on account of limited production. These findings imply the current vaccine shortage can be eliminated this year.

To put this surplus in perspective, with the expected production and delivery schedule, COVAX is expected to receive 1.11 billion doses by the end of this year. Sharing surplus vaccines with COVAX would more than triple the vaccines available to that organisation this year. This highlights the critical importance of distributing worldwide the huge number of vaccines likely to be produced this year.

What could go wrong? Apart from vaccine hoarding by governments and the risks created by policies that disrupt relevant international supply chains, concerns have been raised by sectoral experts about possible shortages of certain COVID-19 vaccine ingredients and medical items needed to distribute vaccines. Examples of bottlenecks have been mentioned in recent press reports, however we are aware of no evidence of a broad-based threat to the projected vaccine production ramp up. Still, this matter requires careful monitoring and reinforces recent calls for greater transparency along the entire vaccine production and distribution chain.

Box: How Airfinity’s production projections are made Data was collected on stated annual production capacity for each vaccine manufacturing facility globally, which is used to build a deterministic model. The three main inputs for each facility are company stated production, real observed production, and assumptions on scale-up time. Airfinity tracks the production and deliveries of vaccine doses by each site where vaccine manufacture is underway. Start dates for the bulk production at sites yet to come online are estimated based on when the relevant vaccine is expected to publish phase 3 efficacy data and be approved. A production facility usually takes 3-4 months to reach capacity, an assumption based on expert insight. When available, a production forecast is matched up to observed data and any discrepancies result in adjustments to the forecasting model. This approach generates forecast over time of the total number of doses produced for each vaccine across the globe. 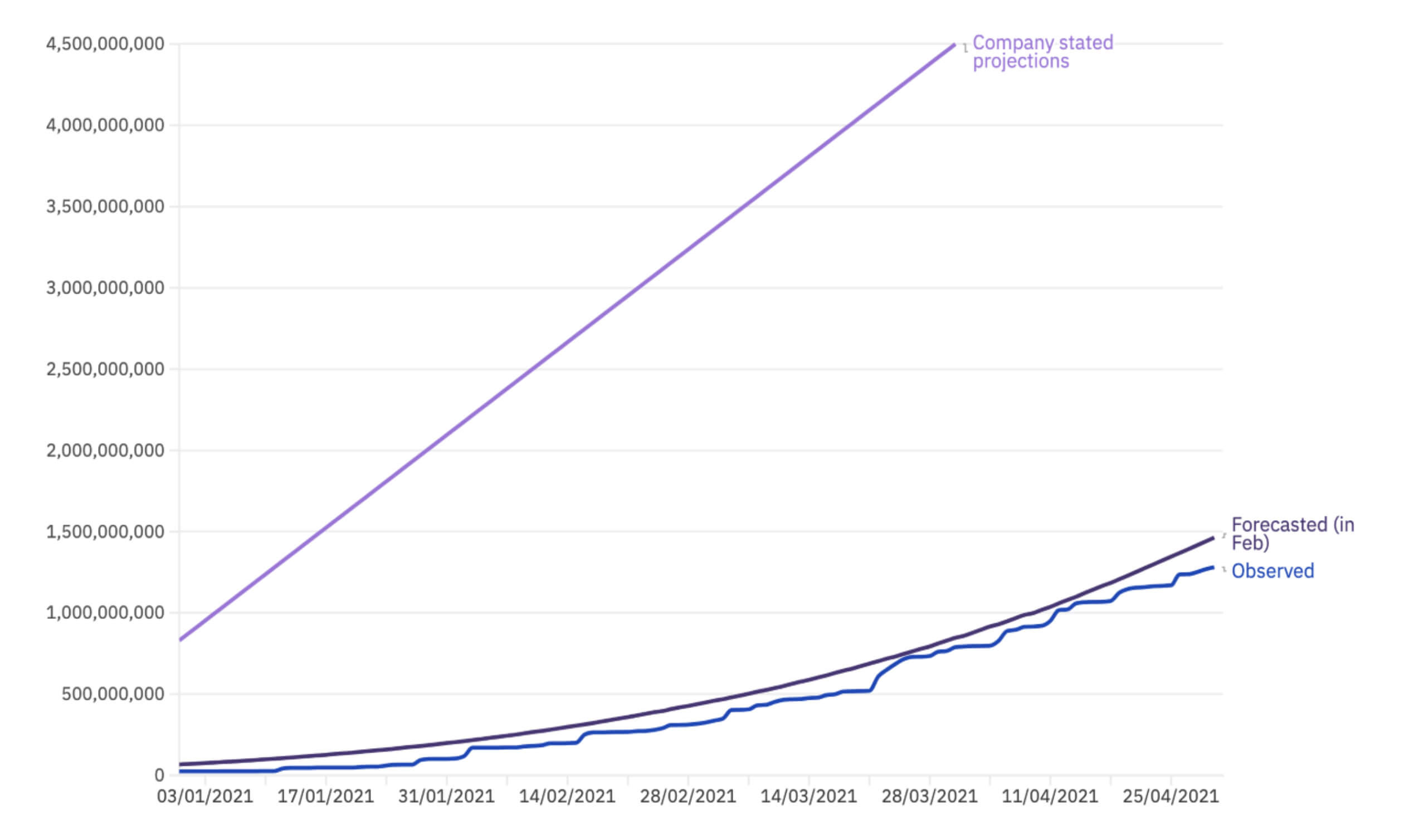 Figure 2: By the end of 2021 total COVID-19 vaccine production is forecast to exceed levels needed to reach global herd immunity. 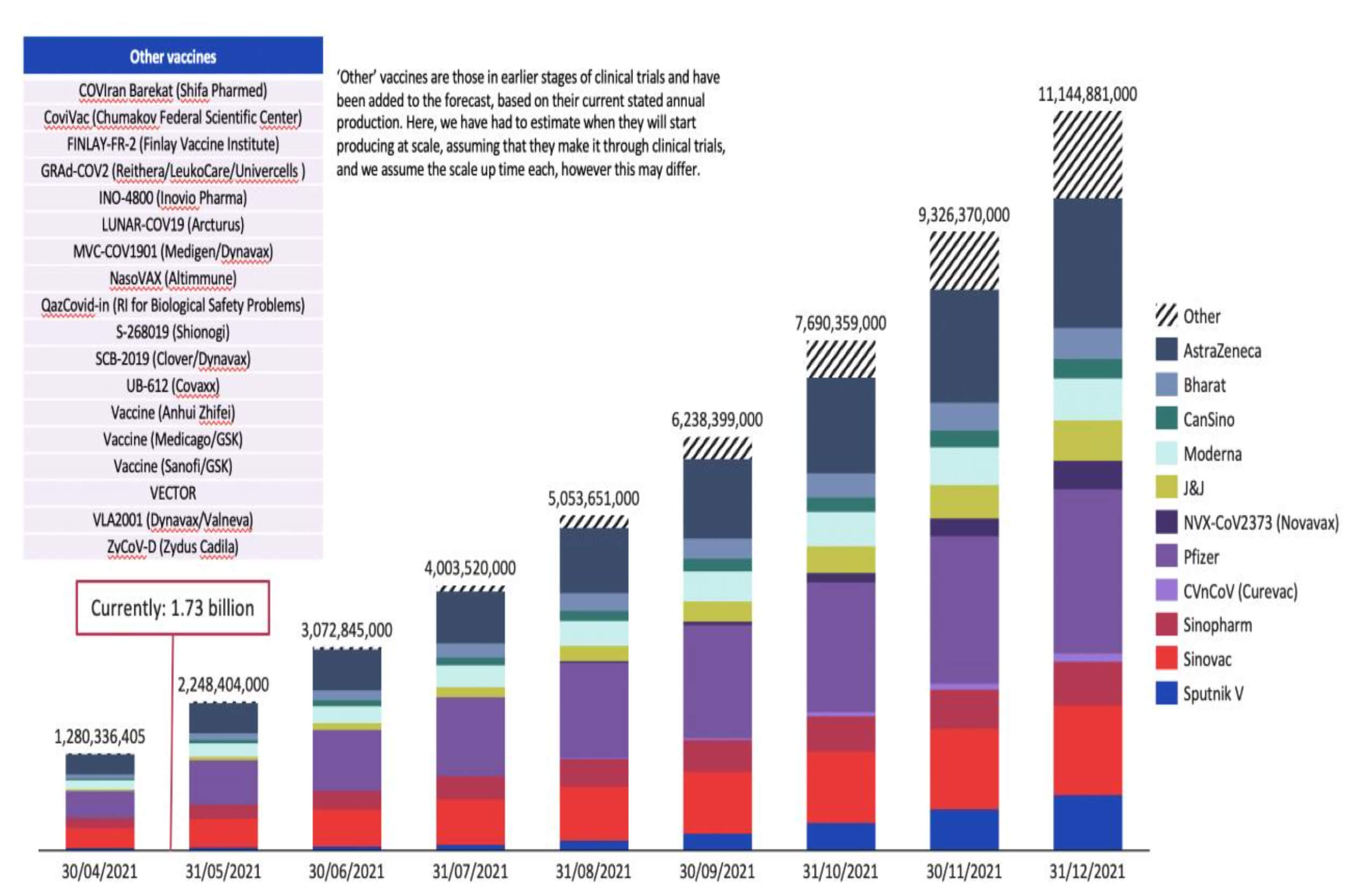 Sign up to receive a free sample of our insights

Airfinity will never share your data with any third parties. By completing this form you are agreeing to being contacted for marketing and product communications. Our Privacy Policy can be found here.

For verified organisations only.

To schedule a demo today, contact us. To receive our media briefings, email press@airfinity.com.

In The News
Predictions
Insights