This year’s American Society of Hematology (ASH) meeting will be celebrated at the Georgia World Congress Center in Atlanta, Georgia, or virtually, from December 11-14, 2021, featuring the newest advances in hematology and offering several key updates on the non-Hodgkin lymphoma space.

The ASH 2021 meeting includes key data presentations for those assets like longer follow-up from the TRANSCEND-NHL-001 trial, which was the base for Breyanzi’s FDA approval in LBCL (EU approval expected in 2022) or data from the BELINDA study evaluating Kymriah in aggressive B-cell NHL after relapse or lack of response to first-line treatment. In August 2021, Novartis announced that the Phase III BELINDA study did not meet primary endpoint of event-free survival and how the full data was to be presented in a future conference. Finally, the first primary analysis for ZUMA-7 evaluating Yescarta in 2L LBCL will be presented with Gilead’s having already submitted the Supplemental Biologics License Application (sBLA) for earlier use of Yescarta in LBCL based on these data.

This year’s ASH meeting also includes pivotal data for two of Roche’s CD20xCD3 bispecific antibodies, mosunetuzumab in 3L+ FL and glofitamab in 3L+ DLBCL. As per Roche’s Q3 2021 financial results, early filings for mosunetuzumab and glofitamab based on the GO29781 and NP30179 study results are on track for Q4 2021 and Q1 2022, respectively. Additionally, interim results from the FIH dose-escalation study of Xencor’s plamotamab are reported. Of note, Xencor has recently signed an exclusive collaboration and worldwide license agreement with Janssen Biotech to develop and commercialize plamotamab. 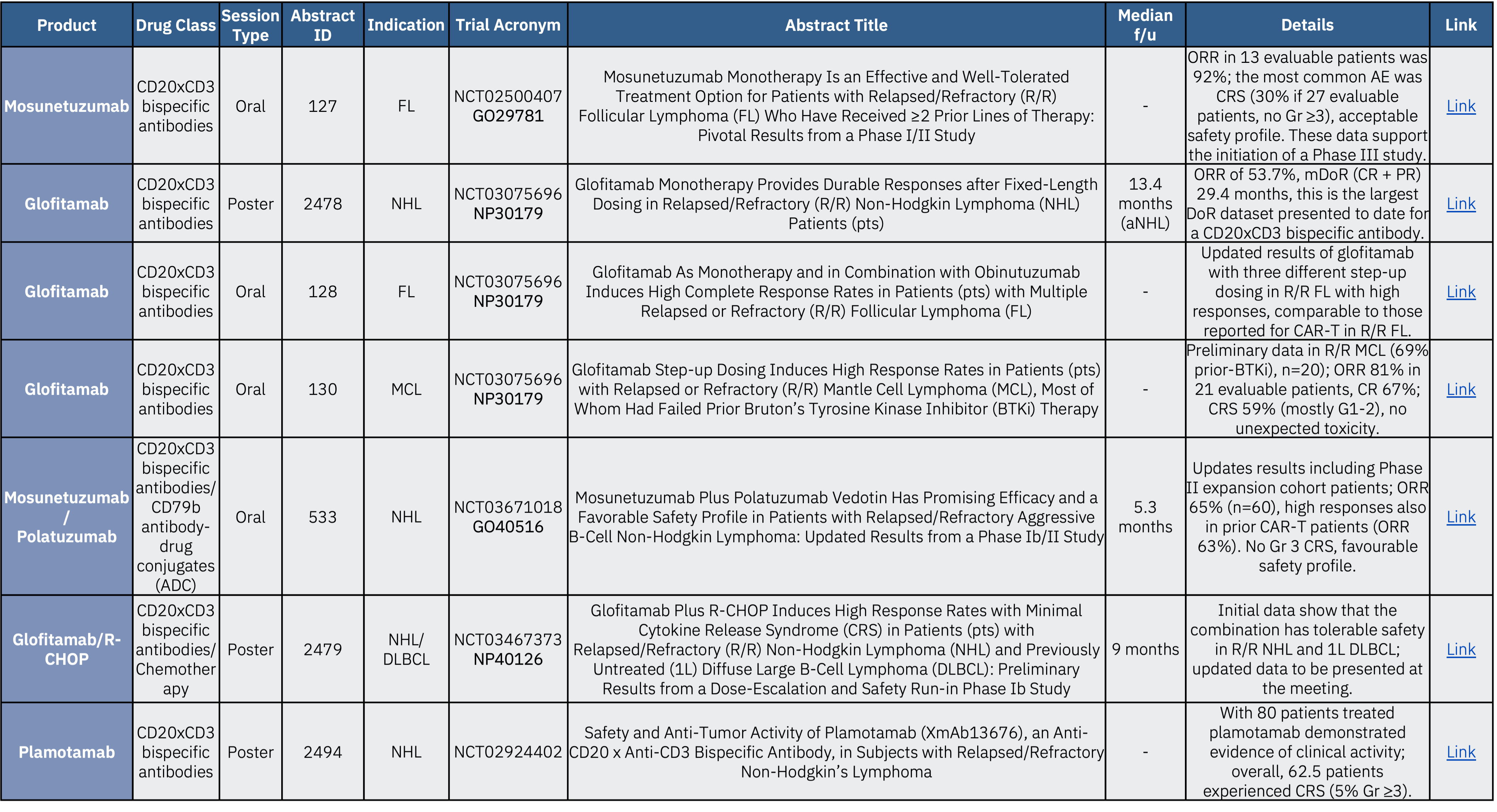 As per BTKi, the meeting includes updated results from the Phase I/II BRUIN study in MCL. Importantly, based on previous results from this same study, Eli Lilly initiated the Phase III BRUIN MCL-321 study (NCT04662255) evaluating pirtobrutinib vs. other approved BTK inhibitors in MCL. For the already approved BTKi, BeiGene keeps generating differentiating data for Brukinsa (Zanubrutinib) vs. Imbruvica (ibrutinib) and Calquence (acalabrutinib), including preliminary results of its own investigational BCL-2 inhibitor, as monotherapy or in combination with Brukinsa.

Furthermore, the FDA recently (April 2021) granted accelerated approval to ADC Therapeutics Zynlonta (loncastuximab tesirine, CD19 ADC) for the treatment of R/R LBCL based on LOTIS-2 (NCT03589469). Now, results from an ongoing Phase I/II LOTIS-3 study of Zynlonta in combination with Imbruvica in DLBCL patients will be presented at the meeting. 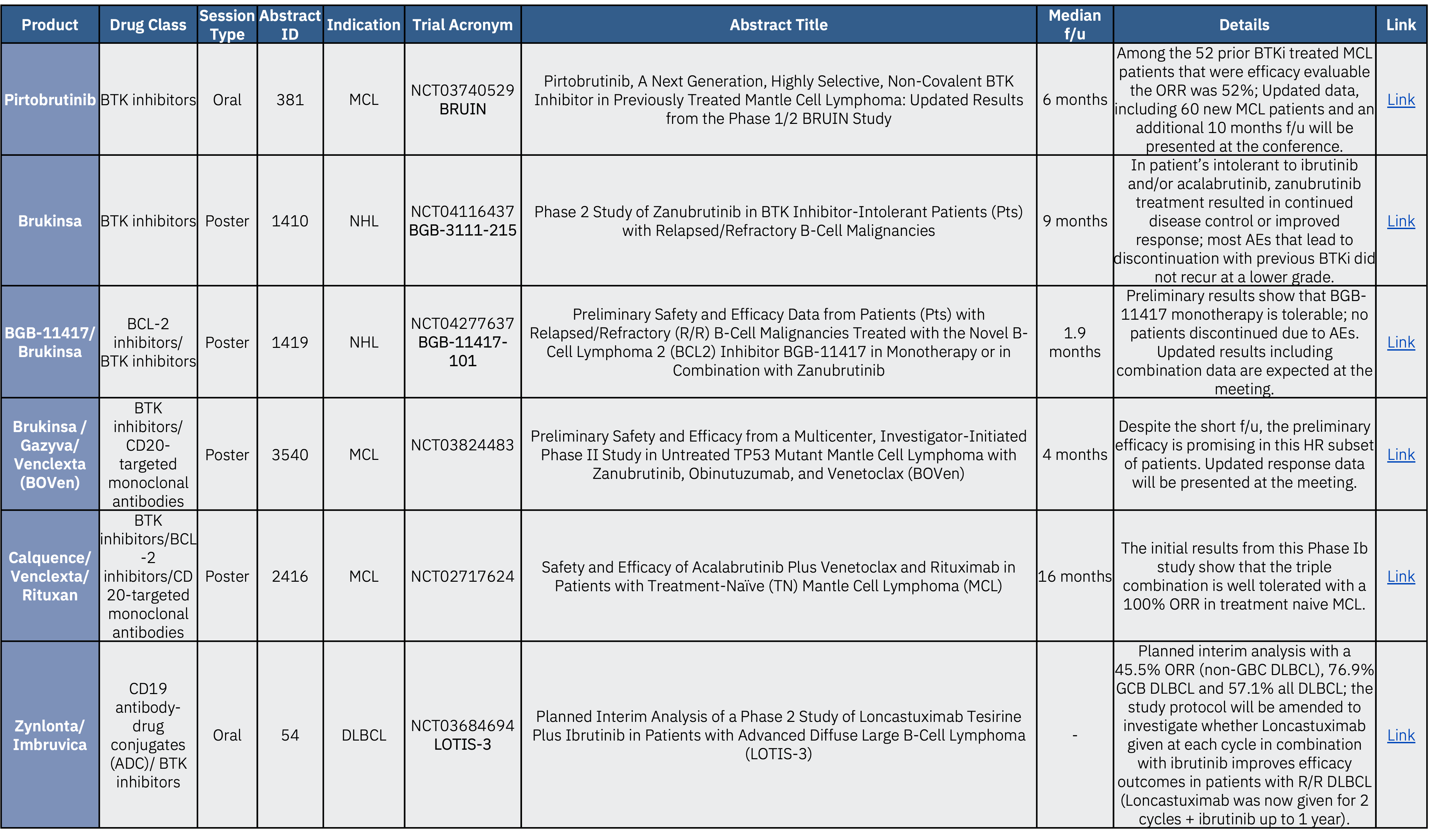 In November, Incyte announced that the FDA accepted the NDA seeking approval of parsaclisib for the treatment of patients with R/R FL, MZL and MCL based on the CITADEL-203, -204 and -205 phase II studies with results to be presented at the ASH meeting. Priority Review was granted by the FDA for MZL and MCL; the PDUFA target action date for these indications is April 30, 2022. The NDA for FL will have a Standard Review and a PDUFA target action date of August 30, 2022. Confirmatory phase III studies are in preparation for parsaclisib in patients with MCL (CITADEL-310) and relapsed or refractory FL and MZL (CITADEL-302). 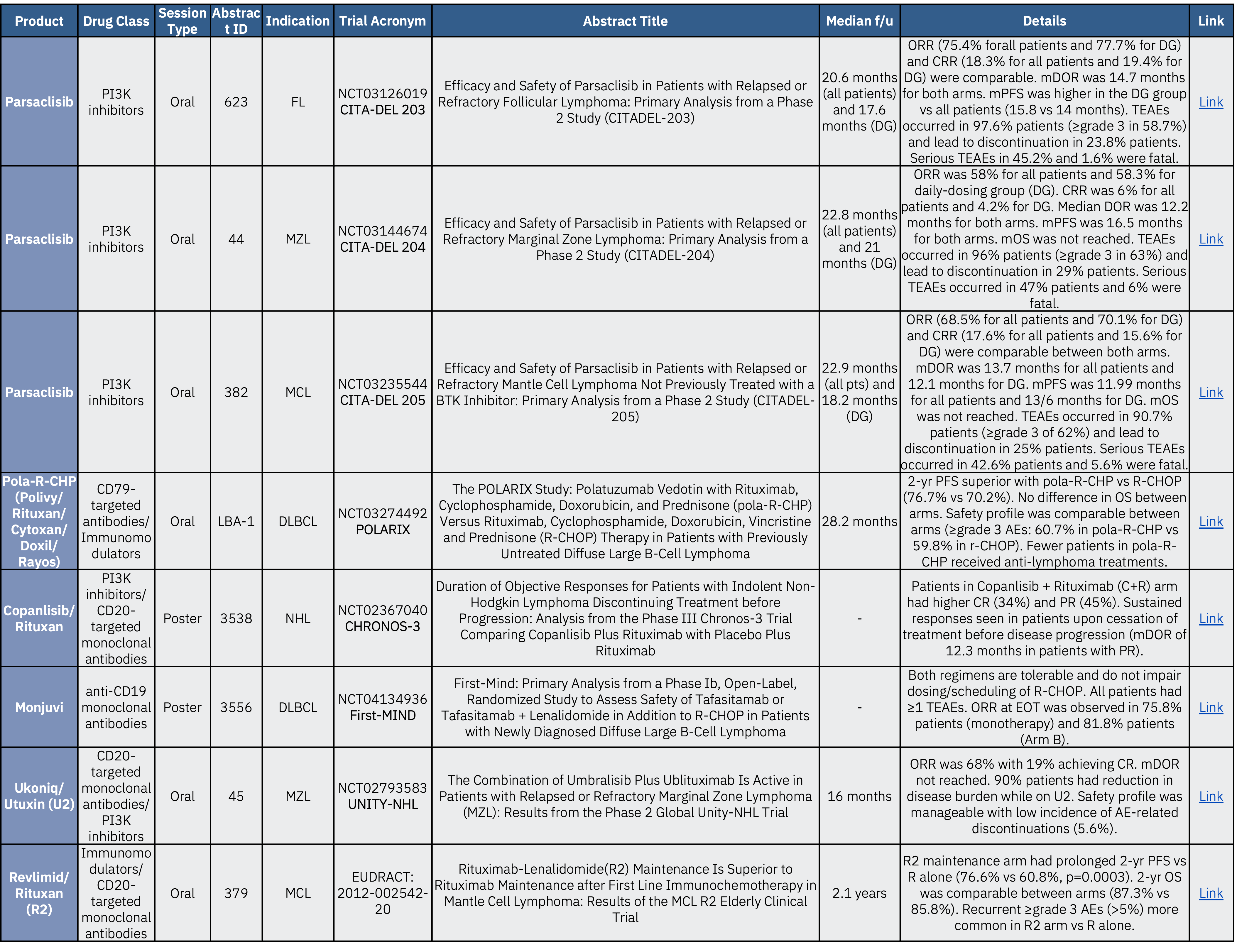 The meeting will also feature the first presentation of efficacy and safety data from Roche’s phase III POLARIX study evaluating the Pola-R-CHP combination in 1L DLBCL as a late-breaking abstract. Despite the improvement in PFS, the limited benefit in OS at this stage might seem disappointing, although it could be early to demonstrate such benefit. Roche has stated its intention to share these results with health authorities, nevertheless, if approved, the lack of OS benefit at this stage could impact the speed of launch in this indication.

Lastly, earlier this year, in June, Bayer announced the submission of a sNDA to the US FDA in relapsed B-iNHL and a MAA to the EU EMA in R/R MZL seeking approval of the combination of copanlisib and rituximab supported by positive results from the Phase III trial CHRONOS-3 study. The results were previously presented in April at the AACR meeting, and simultaneously published in The Lancet Oncology but the ASH meeting features a DOR comparison in patients after stopping treatment vs DOR in those who remained on treatment.

For more information about Airfinity's analytics and predictive capabilities in Multiple Myeloma or to request access to our post-conference report for ASH 2021, contact the team here.