According to the WHO, cardiovascular diseases (CVD) kill nearly 18 million people each year – more than cancer and respiratory diseases combined – and are the leading cause of death globally. Of these, over 15 million deaths result from heart attacks and strokes, which are caused by blockages (due to so-called plaques) on the inner walls of blood vessels. Plaques contain substances known as lipids, which include fats and cholesterols. This can lead to formation of blood clots (thrombosis) resulting in a reduction in blood supplying the heart, brain, and other organs with death of tissue as a result. Research has shown that elevated levels of lipids in the blood combined with other risk factors (dyslipidemia) is responsible for an increased risk of cardiovascular diseases as well as diseases of the liver, pancreas, and kidneys.

While preventing the onset of CVD (primary prevention) in people with dyslipidemia is usually first done by lifestyle modification including physical activity, weight loss, dieting and smoking cessation, some people remain at high risk due to reasons including genetics, obesity, high blood pressure, and diabetes. Additionally, people who have survived a heart attack or a stroke in the past remain at high risk for another adverse event. To adequately reduce CVD risk in such patients (secondary prevention), guidelines provided by leading international scientific societies have primarily advised reducing levels of lipids known as low density lipoprotein cholesterol, LDL-C, or ‘bad’ cholesterol.

Historically, this has been done using medicines known as statins, oral LDL-C lowering drugs which, due to their well-documented efficacy, have been in widespread use to reduce CVD risk since the 90’s. However, as our understanding of the magnitude of impact of LDL-C on CVD risk has improved, guidelines have evolved in turn to recommend even greater reductions in LDL-C, which are often not attained in high-risk patients despite the use of statins. It is estimated that only ~55% patients worldwide have optimal adherence to statin therapy to lower LDL-C, and lower adherence has been linked to increased hospitalisation for stroke & heart disease. Moreover, over half of statin treated patients don’t achieve the level of LDL-C lowering recommended by leading international scientific societies even with addition of ezetimibe, a cholesterol lowering drug approved in the early 2000s that is often used in combination with statins. Statin users have also reported negative side effects such as muscle pain, though this may partly be due to existing negative sentiments around statins.

In 2015, two new lipid-lowering drugs, alirocumab and evolocumab, were approved. Both were drugs known as PCSK9 inhibitors. These drugs demonstrated significant clinical efficacy both in lowering LDL-C as well as in reducing CVD risk and require monthly subcutaneous injections to administer. However, both are currently recommended only for patients at very high cardiovascular risk who have failed to show benefits on statin therapy.  Despite several price cuts, their high market prices have been deemed not to meet cost-effectiveness thresholds by national institutions such as the Institute for Clinical and Economic Review (ICER) and the National Institute for Health and Care Excellence (NICE).

Several newer drugs are in development which aim to reduce cardiovascular risk through different mechanisms, such as through targeting Lp(a), ANGPTL3, and apolipoprotein C-III, all of which are promising targets for lipid-lowering and cardioprotective therapeutics, in addition to newer PCSK9 inhibitors which have the potential to be more efficacious and cost effective than alirocumab and evolocumab (e.g. Inclisiran, Lerodalcibep, and others). Several of these candidates have already started to demonstrate lipid lowering efficacy and cardiovascular risk reduction (Fig. 1).

Fig. 1: View of Airfinity’s candidate efficacy comparison tool. As the lipids measured in clinical trials differ between candidates, those investigated have been highlighted per candidate and coloured according to their change from baseline after treatment.

Airfinity tracks all new science in the field of emerging lipid lowering therapeutics, including data from > 70 candidates in development from conferences, peer-reviewed and pre-print publications. In addition to clinical trial results with lipid lowering and CVD risk reduction efficacy and safety data, Airfinity also monitors the latest scientific information around new drug approvals, cost effectiveness analyses, updated clinical trial progress (Fig. 2) and scientific society guidelines. These are analysed to provide tools and real time insights to act earlier on new scientific development and identify the drugs on the horizon that are likely to provide patients with the best cardiovascular outcomes in the future. 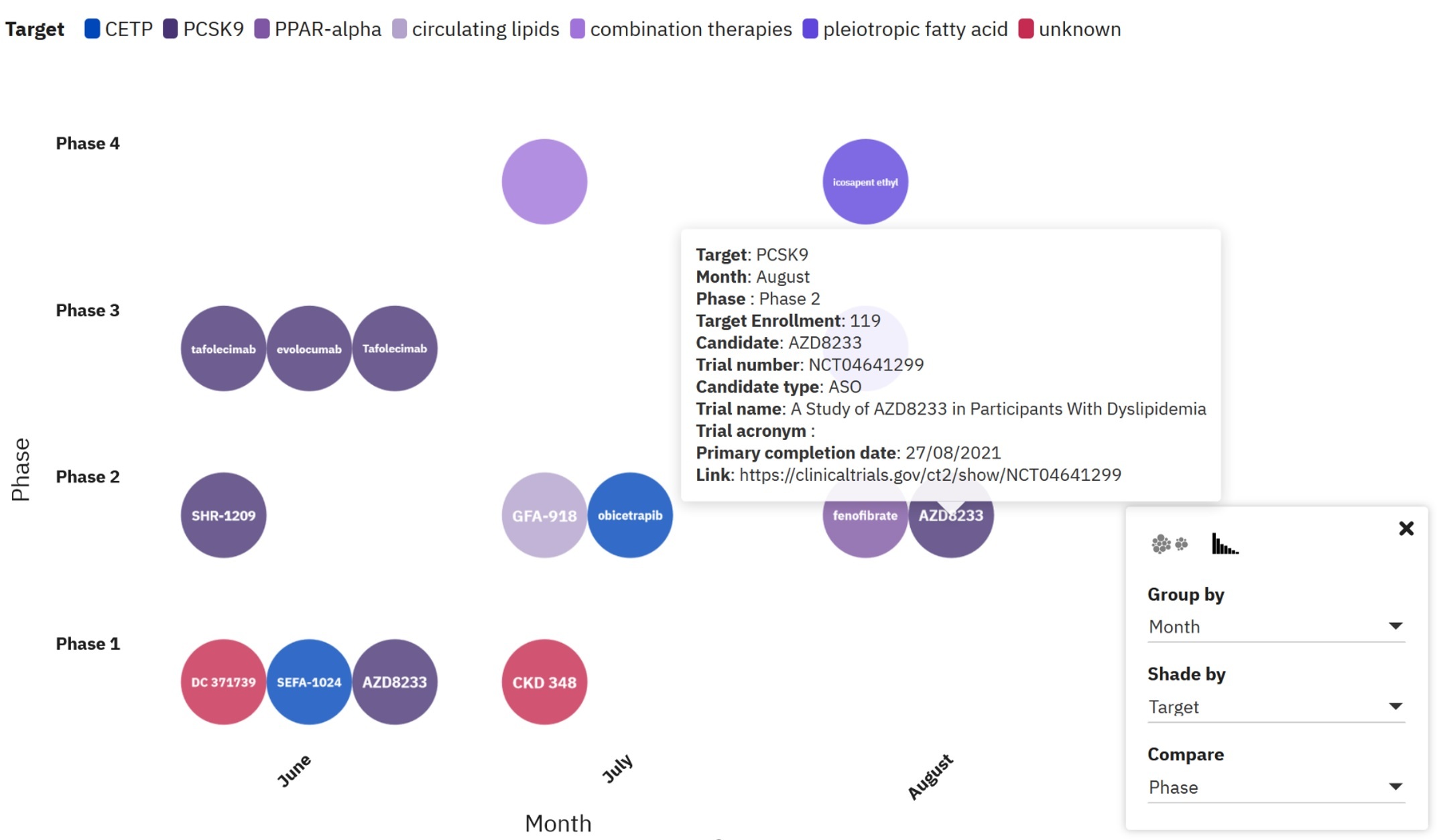